Okay Okay, thinking back… now where was I. That’s right… I was in El Nido, I was Young (I was still 31), I was full of hope, I had so many dreams and I was eagerly awaiting my friends boat to arrive.

In tropical paradise style I met their boat whilst aboard my rented Paddleboard (of course I’d practiced a little yoga on the board first). It was great.

Me Got Some Friends! 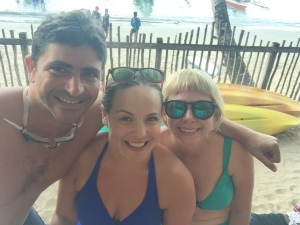 Everyone tells you when you arrive, you must do Tour A and C

We went on a tour, this was called Tour C – we had an amazing group of people with us so quickly made some new and awesome new friends. We nicked named it Tour F cause it was kinda dodgy and they didn’t know what they were doing so much, but we had a brilliant day… AND it was my Birthday!

Post the tour our new gang head to the local bar and played a game of Dart…. there was only one Dart, hence the name. Now I’m not usually one to partake in such things, I’m a bit of a party pooper around ‘man cave games’ but I surprised myself and had a great time (and I came 2nd out of like 7 people) …. and it wasn’t just the shots everyone kept buying me. So cut a long story short I had a brilliant night, ended it with a late night ocean skinny dip and prepared for Tour A in the morning.

Time to hit the ‘town’

A bit of Dart 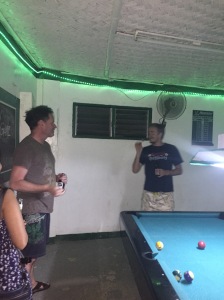 Some fun times and great people! Note the Twinings behind the counter, very good. haha. 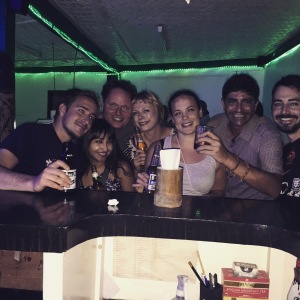 I woke up on the day that was not my birthday (I was no longer special) and I felt horrid but hey I kinda expected that… goes with the territory. I wish I could say Tour A was amazing, but it was HELL. I was cold and shivering, I was vomiting and I really felt that someone should just euthanize me. Anyway, as we pulled up at 6pm that evening I gave my stomach acid one last chance of freedom off the side of the boat and went back to my room.

It’s no surprise I have no photos from Tour A

The next few days came and went, it became apparent a few days later that ah Tour F perhaps gave me some good old fashioned food poisoning… just cause I’m 32 now doesn’t mean that I get 3, 4, 5 day hangovers with cold sweats (well it better not). Okay, guess this isn’t going to be a scuba trip after all.

Anyway being a glutton for punishment I agreed to catch a 7 hour shuttle bus with a friend (it was so squashed, but it was a plus not to have live roosters) from El Nido to Sabang, which is more remote and quiet than El Nido. I managed it, I guess I was getting better… it was on and off but life was still not good in Sarah Town.

I did however perk up for what was the most amazing place I went to in the Philipines, the 7th Wonder of the World…. The Underwater River. Wow, wow and wow. My friend being a smart cookie insisted we go at the very end of the day which meant a private boat and no one else behind us – it was sheer brilliance!

We do a little walk in the bush and then this appears… Now this is the sort of beauty I have been waiting for. No words!

So so so pretty

Yep, we’re going in there!

Sorry no more pics, it’s dark in the cave!

So night one in Sabang, we went out and I watched my friends eat as I picked at some fruit, then I walked myself back to my room early. It was progress at least and I loved the underground river today.

I was jealous of my Swedish friend who checked herself into the fancy resort up the beach. I was even more sad to find out that this new place was worse than the first night in El Nido. See below for where sensible people stay…

By now I am used to no flushing toilets, but this place I was staying in for $10 that night (I know what did I expect for $10, I don’t know how it all happened) had no power at all i.e. no lights and no sink. I used the last little ounce of power my phone had to find my way to ‘hug’ (yuck, as if i can touch it) the toilet bowl and again slept with a sheet shivering to sleep.

The next morning. This is the part where I bowed out – I am no backpacker, I try to be but seriously Fuck That Shit.

My new friend works at Volvo. Safe, reliable and Swedish. This is exactly what I needed in my life. Off I go to find her at the fancy resort. I feel better the moment I check in… oh the bliss.

I say no way to the rest of the trip to Puerto Princessa City (I aint moving till I leave) and slowly but surely, through steady hammocking and pool time I get myself back to ‘normal’.

What a happy ending. 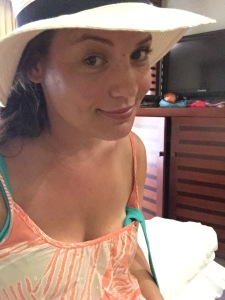 Okay, so for those of you interested in more than just my dribblings…. that’s you McChonkies! But Kirsty, I know you enjoy the dribbling haha.

El Nido is a tiny little strip along the beach with some bars on the beach, average restaurants and really basic accommodation. The consensus with the group I was with was that we just came too late. The place has grown too quickly and hasn’t really been able to catch up quick enough, it was marvelled by the world but then the world came (last year it was voted best beach in the world by a French Newspaper)…. The beach itself in my opinion would struggle to rival Seaford Beach, but it is a great hub for island hopping. The islands, lagoons etc are all pretty damn spesh.. although not necessarily all that unique, they would be amazing to stumble across but when they are jamming with tourists it’s just not the same.

So Sarah says, it’s a B Grade Destination. No Brad Pitt, but still smokin hot. Good fun, really pretty but don’t go too out of your way for it.